Get some dark chocolate into you! 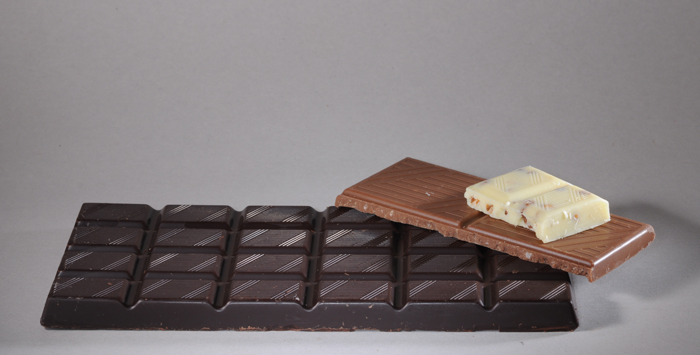 Chocolate is in the news again as the latest “used to be bad, but now is good for you” food. I can’t help but think of Woody Allen in “Sleeper,” wrapped in Birds-Eye tin foil, struggling to consciousness in the distant future, and being handed a cigarette to calm his nerves.

Chocolate has always been viewed as a guilty pleasure, something thick and sensual on the tongue that you could almost see sliding down to your hips. A Puritan heritage subconsciously assured us the damage done would more than balance the pleasure.

But that isn’t the whole story.
Chocolate, especially the dark variety (70 percent cacao), is full of good stuff: bioflavonoids, good fats and polyphenols. These are classes of biological pigments that are also found in red wine and black tea.

These compounds do a number of great things for us. They protect us from oxidative stress (an imbalance in the body), slow sugar absorption and decrease insulin resistance. All this has been well known for years. But the startling news is that dark chocolate doesn’t make your overweight, it actually helps you lose weight. Who knew?

The first hint: the Swiss have the largest per capita chocolate consumption at over 20 pounds per person per year, but only an 8 percent obesity rate.

Scientists found this perplexing enough to take a break from cancer research, and started studying chocolate. They found that a small amount of chocolate on a daily basis measurably reduces food craving, resulting in less sugar, salt and fat consumption.

Insulin spikes, which contribute to fat production, are reduced and insulin resistance is increased, which should help prevent diabetes. Mice that were fed dark chocolate were found to have more mitochondria, which means the muscles burn more calories.

If you eat the equivalent of two dark chocolate Hersey’s Kisses about 20 minutes before lunch and dinner, it does just what your parents told you it would: it ruins your dinner.

In this case, your ruined dinner means you end up eating less and losing weight. You still need to maintain a balanced and healthy diet, and exercise helps, but taking some of those calories in dark chocolate will help people win the race.

Heart health is also improved by some daily chocolate. The bioflavonoids protect the blood vessels, meaning fewer strokes and heart attacks. This is separate effect of chocolate consumption, in addition to lower obesity rates. Cholesterol and blood pressure are also improved in dark chocolate eaters. These effects are not trivial – heart failure is reduced by one-third.

Type 2 diabetes – also known as adult-onset diabetes – rates are increasing dramatically in the U.S. One cause of this is insulin resistance that occurs with obesity. Dark chocolate slows down sugar absorption from the gut and reduces insulin spikes as well as insulin resistance. That helps prevent the underlying changes that trigger diabetes.

Stress causes the body to release the hormone cortisol. This is associated with all manner of bad stuff. Eating some dark chocolate daily decreases the release of cortisol and decreases the anxiety that accompanies it. You feel less stressed, and so does your body. Could this be a cure for Type A personalities?

Mental health is one of our most valuable assets. Dark chocolate increases blood flow to the brain. Some research showed improved brain function in elderly people with a history of regular dark chocolate consumption. Scientists are investigating using the bioflavonoids in dark chocolate to prevent Alzheimer’s. I can think of worse prescriptions than eating chocolate.

This new research shouldn’t be interpreted that eating a pound of dark chocolate a day would be a healthful diet. However, a modest amount, up to 1 ounce on a daily basis, will reap all these benefits.

The important thing to remember is that dark chocolate (70 percent cacao or greater) should be a daily activity. Milk chocolate has more sugar and fat, and fewer bioflavonoids than its more bitter cousin, dark chocolate.

I resolve to eat a small amount of dark chocolate with a glass of red wine tonight, and ponder what to do with my long life.